This city’s multicultural communities shine on a 12-country tour

I’ve always been very proud of my German heritage, even though I was born and raised in the United States.

As a child, they regaled me with stories of the old country—the festivals, the food, the culture, the family.

My grandparents emigrated from Germany to the United States before World War II, but they and my parents have always spoken fondly about our rich heritage tracing back to Berlin and Hamburg. As a child, they regaled me with stories of the old country—the festivals, the food, the culture, the family. They came to the United States to escape the Nazi regime, but they never lost or forgot all they left behind.

As a child, they regaled me with stories of the old country—the festivals, the food, the culture, the family.

So, when I learned my company needed me to attend a multiple-day conference in Omaha this past summer, I was thrilled to see information online about a 12-country ethnic tour in the city. The full tour takes three days, guiding visitors to gathering spots—from churches to temples to restaurants—celebrating the cultures of Asia, Scandinavia, the United Kingdom and more. It was established to celebrate the rich diversity of the city—many of the organizations involved already held annual events with entertainment and active members who enjoyed sharing their heritage, so the pieces were there for an organized tour.

The prospect of learning more about my German ancestry and culture, as well as other countries, was particularly appealing—as long as my team could make some time to enjoy it.

Minutes after checking the itinerary and learning we had an afternoon open, I surveyed my colleagues at the conference to see if they’d like to join me for an abbreviated version of the tour, making five stops instead of all 12. Many said yes, including three of my closest co-workers. Then, I contacted Visit Omaha to help coordinate our five selected stops. 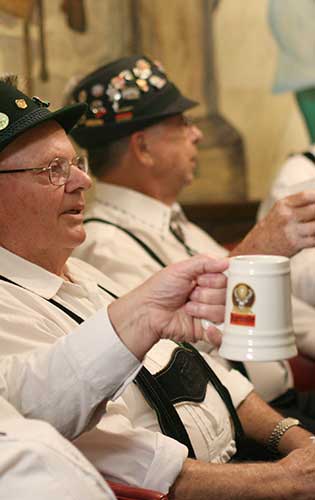 The afternoon of our tour, we skipped lunch to ensure we had room to taste everything ahead. Don, Terry, Jodi and I, and the rest of our colleagues, met our motorcoach at the Omaha Visitors Center, and our journey around the world began with my grandparents’ home country. We had the privilege of celebrating Oktoberfest (and it wasn’t even the season) inside the tall ceilings and old-world brickwork of the German-American Society in southwest Omaha.

It was an energetic, audience participation-filled afternoon that transported us to Deutschland.

We enjoyed an authentic meal of rouladen—bacon, onions and pickles wrapped in thin slices of flank steak, browned in butter, simmered in beef broth and served with spaetzle (soft egg noodles) to soak up the gravy; sauerbraten, which is German pot roast; and jägerschnitzel, pork cutlets pounded thin, breaded, fried and then topped with a sour cream-mushroom gravy.

It was an energetic, audience participation-filled afternoon that transported us to Deutschland.

“I bet this reminds you of your grandparents, doesn’t it, Brandon?” Jodi asked as we enthusiastically ate our meals.

“It’s like Oma Georgia made this for us herself,” I said with a smile. “She loved to cook and entertain people, telling stories of her and Opa Joe’s past. She would absolutely love this if she were still with us.”

After dinner, the German-American Society’s dance troupe revisited the old country by performing dances, followed by the German men’s choir, who led our group in a traditional German sing-a-long. It was an energetic, audience participation-filled afternoon that transported us to Deutschland.

For me, the sights and sounds were so familiar—it was like living through one of my Oma Georgia’s stories. 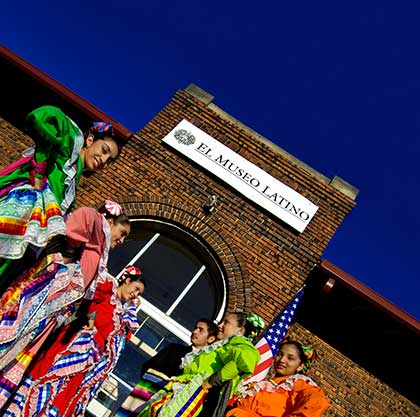 Try some soul food with a Southern sampler from Big Mama’s Kitchen. 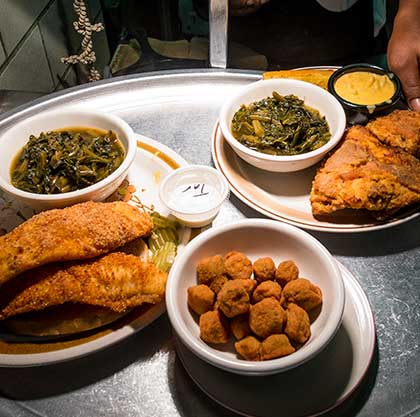 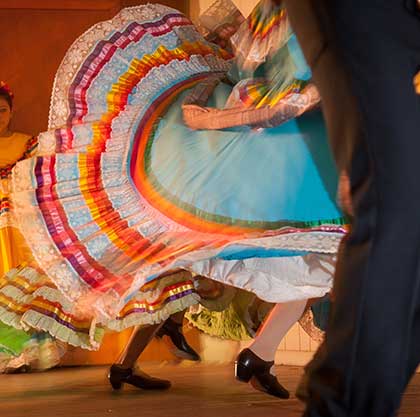 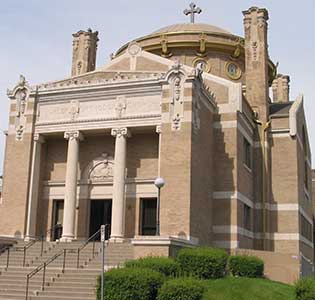 We re-boarded the motorcoach and drove to the next stop on our abbreviated tour: St. John the Baptist Greek Orthodox Church.

We learned about customs like Greek naps called mesimeri, meals and Greek phrases.

We stepped off of the bus and were welcomed into the beautifully ornate, gold-domed, Byzantine-style church by the wonderful aroma of Greek food as we took our seats in the church pews. 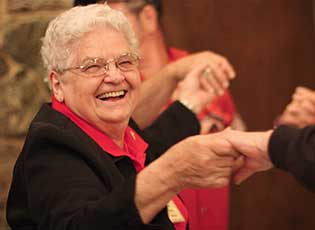 “What’s that amazing smell?” Don asked as we took our seats.

We learned about customs like Greek naps called mesimeri, meals and Greek phrases.

Our exploration of Greek culture in Omaha began with a short oral presentation and tour by Father Chris about the history of Orthodox Christianity and the church. After, we took photos and asked questions before being led into the church hall for a traditional Greek dinner. Although we were still full from being hosted by the Germans, we couldn’t resist!

We all agreed our favorite dish was fasolakia, a delicious green bean dish. After dinner, we were entertained by descriptions of traditional Greek life. We learned about customs like Greek naps called mesimeri, meals and Greek phrases.

During the baklava dessert—a rich, sweet pastry made of layers of filo filled with chopped nuts, simultaneously sweetened and held together by syrup or honey—church volunteers danced in colorful Greek costumes and encouraged us to participate and to learn a few traditional Greek dances.

Ten members of our tour volunteered, including Jodi, enthusiastically twirling and holding hands with the Greek volunteers as we clapped and shouted along. Soon, Jodi received a colorful scarf to wear around her hips.

Whirling around the world

I know this is called the ethnic tour, but I think it’s really a food tour, too!

After enjoying Latin American desserts and watching Mexican folk dancers at El Museo Latino, we attended an authentic Chinese tea tasting at the Tea Smith in the Old Market.

At the end of the tour, we returned to America with a special tour add-on—a Southern-style dinner at a fantastic restaurant called Big Mama’s Kitchen in the northern part of the city. As we stepped off the bus, we were greeted by Gladys, who identified herself as Big Mama’s daughter.

“I’ve heard of this place,” Jodi said. “I saw it on an episode of Diners, Drive-ins & Dives on The Food Network. The food here is supposed to be out of this world.” 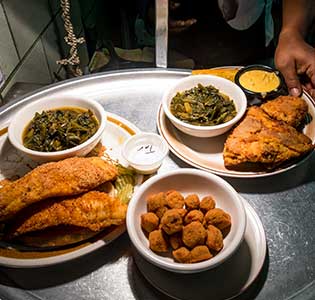 I know this is called the ethnic tour, but I think it’s really a food tour, too!

Once seated, Big Mama joined us and shared her story about her lifelong love affair with food; soul food in particular.

“I know this is called the ethnic tour, but I think it’s really a food tour, too!” I said to my group. “I’m impressed that so many people volunteer their time to share their cultures.”

“That’s probably why the tour is so successful—everyone seems really passionate about it,” added Terry.

“They were all incredibly friendly, too. Midwestern hospitality at its finest,” commented Don.

“No doubt,” Jodi said. “We had a pretty efficient trip around the world today. Maybe when I’m in town for my next conference, I’ll try the stops we weren’t able to make.”